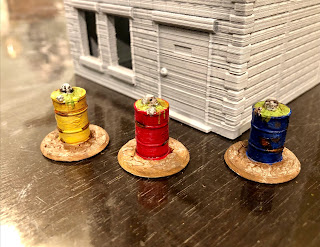 PEF's, or Potential Enemy Forces, are one of the ways in which All Things Zombie keeps the  solo player on their toes. I've used poker chips in the past, but for this second iteration thought I'd do something special so I found these design on Thingiverse and printed up three toxic barrels, complete with emerging zombies, to use instead.  In the game, once these randomly-moving entities are seen by someone, can become zombies, civilians, police, or nothing at all.

Posted by WQRobb at 4:49 PM No comments:

Email ThisBlogThis!Share to TwitterShare to FacebookShare to Pinterest
Labels: zombies 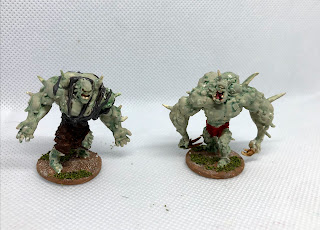 So after I painted these two beefy zombies I discovered that the one on the right is supposed to be wearing slippers, so I painted them on after I took the photo.

I tried something different with the skin tones of these zombies.  Previously I had been doing the Zombicide zombies in grey skin tones--these I did in green and I like the effect.  I might do toxic zombies in green, regular zombies in gray--I'll just have to see.  What are your own thoughts? 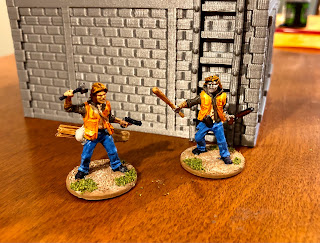 I took a little hiatus from the Zombicide project while I traveled for work, but I'm back and have finished up two more figures, this time the character from Toxic City Mall "Derek."  Derek is some sort of construction worker, with a hardhat, sledge hammer, reflective vest, and a sack of wooden stakes.  I think he looks vaguely like Roddy Piper's character from the movie "They Live," but that just might be the hair, and why would they skip the sunglasses?

So in the background is a bit of a sneak preview into what I'm building on the side as I paint these figures.  More to come.... 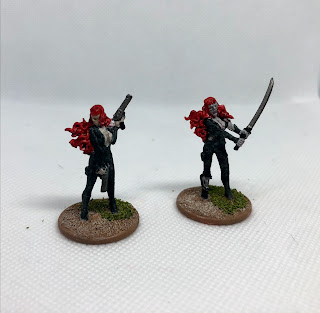 Another character from the Toxic City Mall from Zombicide.  According to the game, this is Elsa, a cat-burglar who is apparently good at lockpicking, et al.

So a quick side note: many of the Zombicide characters are based off of movie or TV characters, some more obvious than others.  This is one of the more obvious ones, namely Black Widow from the Avengers.  Previously I have mentioned painting obvious characters from popular culture in a different color scheme to distance them from the original source.  I kept this one the same because not only am I fan of the character, but her appearance is so set with the source that it didn't seem worth it.

I'm almost done with the Toxic City Mall set at this point, and it is been a joy to tackle. 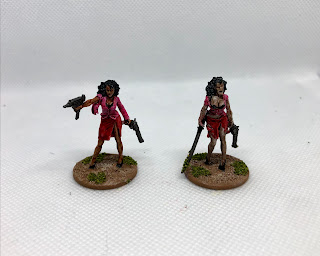 I'm rolling right along with the figures from the Toxic City Mall from Zombicide, miniatures I hope to use in a resurrected (no pun intended) game of All Things Zombie.  My son told me you do not see a lot of miniatures painted up as people of color, so I was glad to tackle "Neema" from the set.  Like a lot of Zombicide minis, she's a little on the exploitive side, but I'm glad how she turned out, especially with my once again experimenting with skin tones.

Posted by WQRobb at 2:23 PM No comments: 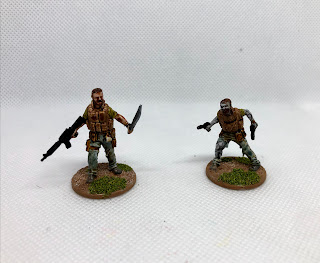 Another figure from the Toxic City Mall Survivor set from Zombicide.  This guy (these guys) is Raoul "the Contractor" and he looks like he's better prepared for the apocalypse than a lot of people.  He's got an assault rifle, pistol, tactical vest, and even a small coffee cup.

I like how this guy turned out a lot, and feel like I'm getting better with the zombie skin tones.

Posted by WQRobb at 4:58 PM No comments: 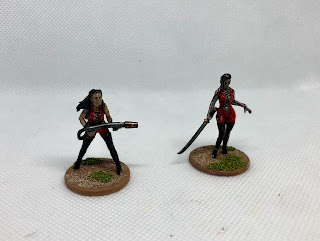 The Zombicide supplement "Gaming Night Kit #1" features two miniatures of the same person: "Kyoko" an Asian woman with thigh-high boots clearly meant to look like Lucy Liu as Alex Munday in "Charlie's Angels: Full Throttle."  One version has her armed with a flame thrower while the zombified version has her with a katana.  I'm not wholly comfortable painting Asian skin tones, but tried to match the color they used on the illustration.  I do really like how the gray zombie skin turned out, though.

As a side note, I've never thought that flame throwers would be a great weapon on zombies.  Too easy to just end up fighting zombies that are on fire. 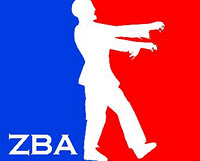